The farmers’ market movement has brought many good things to local communities, and the Bellingham Farmers Market is certainly no different. Growing from a small operation in the early 1990s, it has now become one of the largest markets in Washington State, drawing tourists and community members to its location. The initial attraction for officials in the city of Bellingham was that they saw the market as an investment in revitalizing the downtown area. It has done that and much more, however. 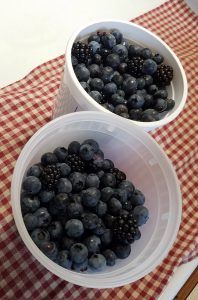 The market has expanded from a few dozen vendors and craftspeople to 100, lengthened its season to run from April to December, and added a Wednesday session to complement the Saturday Farmer’s Market.

The Bellingham Farmers Market has become an important venue for farmers and customers alike to connect with fresh produce, prepared foods, and crafts. The benefits to the city are manifold: more activity in the downtown area, which of course increases tax revenue, more traffic for other local businesses in the area, and, among other benefits, a stronger sense of community.

Local farmers like the market because it allows them to deal directly with their customers, increasing profits by cutting out the middleman, and reduces transportation and storage costs.

Consumers like the market because it brings fresh, locally grown foods directly to them, and with a minimum of storage or processing. As an example, cartons of plump raspberries and blueberries are brought in from Skagit and Whatcom counties, which are only 60 miles away.

Since farmers’ markets are known to have lower prices than supermarkets, the community members know they’re getting a benefit to their pocketbook also. 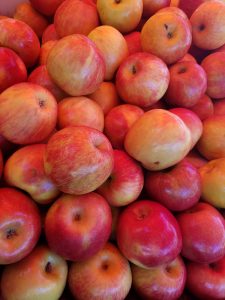 As with all farmers’ markets, the Bellingham Farmers Market has become a beloved local institution, with its own special character. The market opened on June 19, 1993, and that first day a tradition was established that is still carried on. On opening day each year a cabbage is thrown by a city official to a long established vendor. There are other traditions as well, including Kids Vending Day, on the last Saturday of each month, when the tables are manned by no one over 18. Children as young as five years old are allowed to set up tables where they can sell things like home grown tomatoes, eggs laid by their own hens, and homemade pies. There is a real community spirit in the air of this market, which has a social aspect that is at least as important as its business one. People enjoy meeting and talking to their neighbors and friends, and its a high point of their week to visit the market.

Ironically, the Bellingham Farmers Market was not started by farmers or city officials. Two Western Washington University students had the vision, and they approached local citizen Del Lowry for help in getting their idea off the ground. Lowry laid the groundwork for the market, along with farmers, craftspeople, and city officials, and after a lot of planning and organizing, the market opened for business.

It’s a real success story for Bellingham, its citizens, and the local farming community. To learn more about the Bellingham Farmer’s Market check out their website: http://www.bellinghamfarmers.org/

Rick D'Haene is a web developer, specializing in WordPress, with a degree in graphic and website design. Rick has extensive knowledge of internet marketing and organic search engine optimization (SEO). He and his lovely wife Melissa reside in Bellingham, Washington, and have a few fun pets to keep them company.

This site uses Akismet to reduce spam. Learn how your comment data is processed.

Call or Email with any questions:
(360) 224-7416
[email protected]
Review Our Portfolio
Get A Website
Questions?
Connect with Bellingham WP

Bellingham WP is proud to provide